Many Christians throughout the world who attend the Palm Sunday liturgy, find themselves participating in the gospel narrative. Regardless of how we may feel, we find ourselves shouting, “Crucify him!”

In that moment, we are transformed from a group of Sunday morning worshipers into the very first-century people who crucified Jesus. This is not a neutral crowd of which we are suddenly a part. Neither is it an innocent crowd. For there are no uninvolved bystanders here, but rather we are a crowd of people with blood on our hands.

Every time I shout, “Crucify him,” it is a heart-wrenching experience for me. I don’t want to become part of the angry mob. I want to step back and say, “Stop! Don’t you know who it is that you’re crucifying?” But having the text in my hands, I know I can’t do that.

No, we can’t put the video in reverse, nor can we stop it or erase it. We are part of the crowd with blood on its hands that calls for the crucifixion of Jesus of Nazareth. As part of this crowd, we become part of the system that crucifies Jesus – a system in which Jesus is betrayed by Judas, deserted by his apostles, condemned by his council, denied by Peter and implicated by the crowd of which we are a part. He is then whipped, mocked, spat upon, hit on the head, and finally nailed to the cross.

But why are we made to be part of the mob that crucifies Jesus? I don’t like being part of this scene. Do you? We would never crucify Jesus. Never. Or would we? Or do we? Could it be that we crucify Jesus?

To answer that question, we don’t have to travel very far. We don’t need to go to Israel or Africa or Mexico or inner city America. All we need to do is look in our own backyards. Friday was a significant day in our local food pantry. Like many throughout the country, our schools are closed for a week which is great news for children. Right?

Mmmmmmm, not really. For some – of course it is, but for others? It’s a living nightmare filled with hungry days and hungry nights and nowhere to turn. You see, when school is in session, food pantry families only need to provide one meal/day. A huge savings for families barely making it from one paycheck to the next.

But with the beginning of spring break, children in our own backyard are home for a full week; and far too many of them are hungry children without enough food to eat. Hungry children we see in town or in the pharmacy or in Walmart or in church or synagogue. Hungry children who do not live thousands of miles away, but are right here among us.

When did we do this to Jesus? When we did it to the least of these who are his children. And when we turn a blind eye to the systems that perpetuate a status quo that results in ever rising statistics of food insecurity in America. 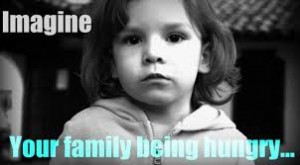 Between 2007 and 2008 the food insecurity rate among households with children, increased from 15.8 percent to 21 percent. A total of 4 million American children experience prolonged periodic food insufficiency and hunger each year, which amounts to 8 percent of children under the age of 12 in the U.S. An additional 21 percent are at risk of hunger – an alarming statistic in this land of plenty.

Mine is also a complicity of silence about these devastating systemic injustices that are all around me – silence rather than advocacy for a livable minimum wage that would enable parents to earn enough money to buy food for their children. Silence rather than speaking out about the very real and growing economic issues in many states – the economic recovery that never happened.

And this is just one issue among thousands in our world today. Each and every time one of God’s children suffers – for whatever reason – God suffers. Any time a child of Jesus goes to bed hungry, or is gunned down as a result of racial profiling or religious reasons, or is kidnapped by Boko Haram or ISIS, or goes without needed medicine – then Jesus is crucified all over again.

As children of God, we are meant to feel the pain of our brothers and sisters and we are meant to do something about it. To take action – in whatever way we can, with whatever gifts God has given us. Yet, we must never forget that we are a people of hope, redeemed through the power of the resurrection. For while we can’t change what happened to Jesus then, we can change what happens to Jesus now.

This entry was posted in Justice Issues, Reflections on Life and tagged crucifixion, crucifying Jesus, food insecurity in America, hunger. Bookmark the permalink.

2 Responses to Crucifixion of Complacency