“We’re off to take a hundred chicks to market!” Sister Jane exclaimed. Her voice was so clear she could have been my neighbor just down the street, but she was in Cameroon, West Africa when I called her one morning. Her enthusiasm and joy never fail to affect me and that day was no exception.

“How do you get them there?” I asked, picturing a hundred chickens loose in the back of her orphanage’s dark blue pick-up truck. Sister Jane is founder of the Good Shepherd Home for Children, home to 130 children orphaned by the AIDS pandemic in Africa.

“They’re all in boxes, Canon,” she replied using my formal title as an Episcopal priest.

“No, in boxes. They’re dead!” she answered, laughing heartily. “We slaughtered them over the last three days. We have been busy, I tell you. There’s blood everywhere!”

“Who on earth slaughtered that many chickens?”

“The older orphans,” she exclaimed, proudly. “Ambe, the child you sponsor, was plucking all the feathers out for three days. Feathers were flying all over the place. You should have seen him covered from head to toe!”

And I could see him all covered in feathers, enjoying every minute of it. You see, the Good Shepherd Home is working valiantly toward self-sufficiency. They tried rabbit farming until dogs ate the rabbits. They tried pig farming until the advent of swine flu. They tried raising cows until there wasn’t enough to feed them. But the chickens seem to be working.

From a dream in her heart and a vision in her head, Sister Jane now operates the largest chicken farm in Bamenda, Cameroon, a city of 270,000 in the North West Province, just below the Nigerian border. With an uncanny sense of what will work, Sister Jane has successfully implemented what world economists spent years of research concluding – that self-sufficiency is the answer to many of Africa’s problems – not all, but many.

Dambisa Moyo’s book, Dead Aid: Why Aid is Not Working and How There is a Better Way for Africa, painstakingly traces why $1 trillion in aid over the last fifty years has not helped and has actually hurt Africa. The aid to which she refers is primarily large scale government to government aid, which too often fosters corruption among African officials. Non-targeted development aid often falls into the hands of dishonest government officials as well. However, aid geared toward specific self-sufficiency projects and micro-finance loans is successful.

With seed money from caring donors Sister Jane now has a burgeoning business that is helping care for the 130 children who turn to her each day for food, clothing, shelter, healthcare, and school fees. I thank God for her perseverance, can-do spirit, and faith that if one project doesn’t succeed another one will.

She’s just ordered 12,500 baby chicks to raise and sell. “Oh, you should see the people lined up here to get their chickens. They come from all over and I sell them for $6. I need lots of soybeans to feed them, but I know that will be coming. I just know it!” she exclaimed with her usual optimism.

Sister Jane Mankaa, my neighbor just down the street.

My new book, I Am That Child, chronicles the story of the indomitable Sister Jane and the children of the Good Shepherd Home in Cameroon. Click on the “Home” page here to read more! 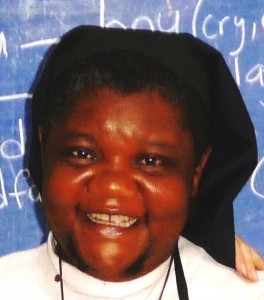